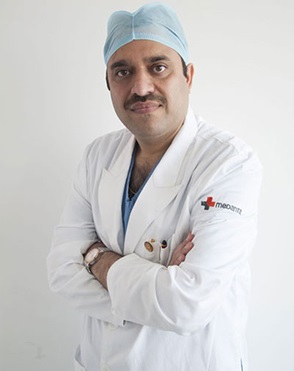 Postgraduated from Dayanand Medical College and Hospital, Ludhiana which is one of the premier institutes of North India in 2002, Dr Amanjeet Singh underwent superspecialization in Surgical Gastroenterology at the prestigious Sir Ganga Ram Hospital. Sir Ganga Ram Hospital is a renowned 650 bedded trust hospital accredited by the National Board of Examinations to train candidates in various specialties and superspecialities.

The hospital has the honour of having DNB seats in maximum number of specialties in India. Trained under the stalwarts of Surgical Gastroenterology and Liver Transplants including Dr Samiran Nundy, Dr Adarsh Chaudhary, Dr Arvinder Soin and Dr Subash Gupta. Had a good exposure to liver transplants during the training in early years when liver transplant programme was still evolving in India. During the training, he received the prestigious Ravi K Jerath award for the best DNB Student of the year 2007. Later joined Sir Ganga Ram Hospital as a Consultant in Department of Surgical Gastroenterology in 2008. Also underwent advanced training at All India Institute of Medical Sciences and laparoscopic colorectal surgery fellowship at SMC Korea. Apart from this, he has been trained in advanced laparoscopy, laparoscopic colorectal and robotic surgery at various centers across the globe.

In March 2010, shifted to Medanta – The Medicity, a World class hospital at Gurgaon as a team. This is a multispecialty health care institution founded by eminent cardiac surgeon Dr Naresh Trehan and envisioned with aim of bringing to India the highest standarsds of medical care along with clinical research, education and training. The Department of GI Surgery, GI Oncology, Minimal Access and Bariatric Surgery is one of the high volume centers for all surgeries related to esophagus, pancreas, colorectal and hepatobiliary system. Apart from performing 2500 surgeries a year with results comparable to best centers in the world, the department also has a DNB programme in Surgical Gastroenterology which is one of the sought after programme in India. The department also has fellowhip and observership programmes for training of surgeons from all over India and South East Asia. presently working as Associate Director in the unit.

Apart from being a member of various surgical societies, Dr Singh is also a reviewer for National journals. He has published research papers in all major surgical journals and has presented papers and attended various national and international conferences all over the world.
He is one of the pioneers of Hand Assisted Laparoscopic Surgery and has designed his own cost effective technique for the same named as “Medanta Handport Technique” which was presented at Annual Conference of American Society of Colorectal Surgeons meeting at Florida, USA last year.